Domestic vacations now make up 85 percent of total American vacations, up 7 points from last year. In other words, during the past 12 months, 13.9 million more vacations were taken within the U.S. compared to internationally.

The rising preference for domestic destinations has also resulted in the increasing popularity of road trips. In 2015, 22 percent of all the vacations taken by American travelers were such trips. In 2016, that number rose to an impressive 39 percent. And, in terms of economic impact, consumer expenditures on road trip travel increased from $66.6 billion in 2015 to $113.7 billion in 2016.

What’s behind this sudden growth? The open road, a car and the freedom to drive anywhere – there’s something distinctly and nostalgically American about the road trip. Celebrated in numerous novels, stories and songs, Americans have been traveling by car with stops along the way since the rise of the automobile and the development of highways and interstates on which to drive them.

Yet, the growth of road trips goes well beyond an attachment to the past – only 18 percent of road trippers cite nostalgia as a reason they chose this vacation style.

Clearly, road trippers are not all the same. Almost half of American vacationers are road trippers, making it too difficult and expensive to market to these travelers as one large monolithic group. Microsegmentation is essential for any travel marketer to attract the most relevant and profitable slice of this market for their businesses.

For this reason, MMGY Global analyzed road trippers to develop traveler microsegments among this larger group. Below, we present just a few characteristics of the four most promising targets among road trippers: the Griswolds, Well-to-Gos, Retired-on-Tires and Freewheelers.

For more information on both road trippers and the four microsegments introduced below, please subscribe to the 2017–2018 Portrait of American Travelers®. 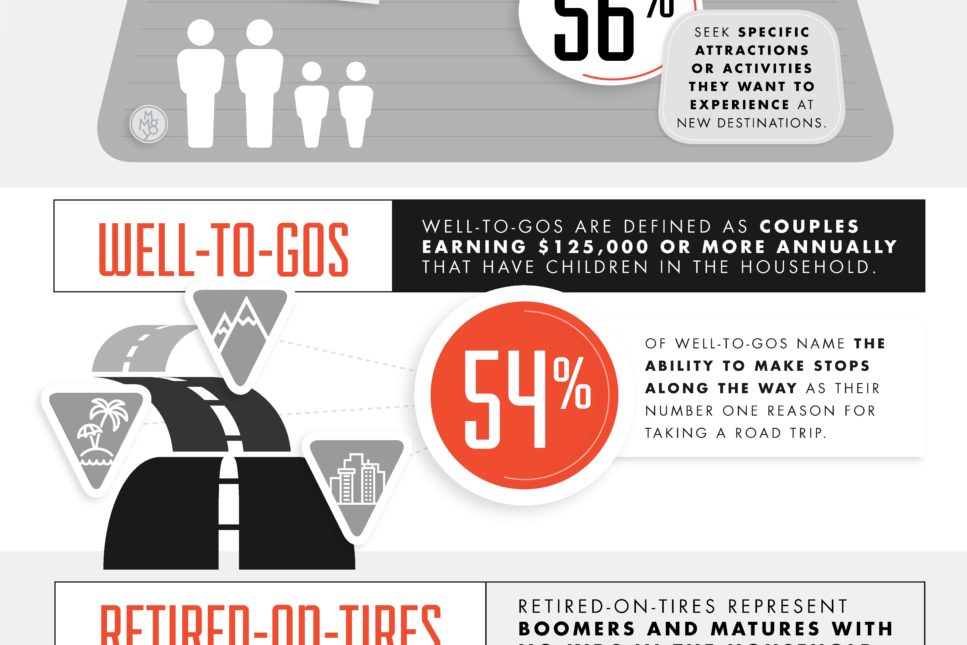